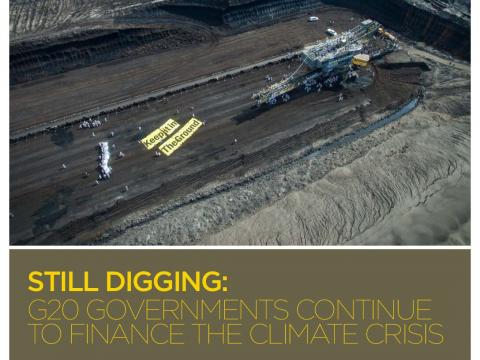 This report by Oil Change International and Friends of the Earth US finds that since the Paris Agreement, G20 countries have acted directly counter to it by providing at least USD 77 billion a year in finance for oil, gas, and coal projects through their public finance institutions.

Summarising public finance flows for energy from bilateral G20 public finance institutions and multilateral development banks (MDBs) in the post-Paris period, this report compares figures from 2016 to 2018 to those from 2013 to 2015, which were originally published in our 2017 report Talk is Cheap. The report reveals that support for fossil fuels has not dropped since the Paris Agreement was made, with annual average support for coal from G20 countries increasing by $1.3 billion per year, and support for oil and gas staying steady at $64 billion a year, far from aligning their financing with what is necessary to limit warming to 1.5°C.